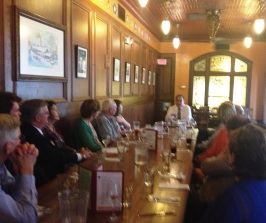 Yesterday the World Affairs Council of CT welcomed Dr. Ghassan El-Eid from the Middle Eastern Studies Program at Central Connecticut State University. Dr. El-Eid shared his knowledge of the protests in Turkey, the recent presidential election in Iran, and the ongoing crisis in Syria in front of a packed Hot Issue Happy Hour crowd at City Steam Brewery and Bar in downtown Hartford. The audience walked away with a broader understanding of current events taking place in the Middle East.

Dr. El-Eid began his talk by asserting that we cannot examine events, such as the crisis in Syria, “in a vacuum.” For example, Dr. El-Eid has recently come back from spending some time in Lebanon, where he witnessed firsthand how what is happening in Syria has directly impacted Lebanon and other nations in the area. Dr. El-Eid let us know early on that there is a great level of interconnectedness between countries in the Middle East and what happens in one nation will most likely have consequences for other actors in the area!

One of the most interesting things Dr. El-Eid emphasized was that if we do not understand history, we cannot understand current events. In particular, he was talking about the Iranian Revolution in 1979 and the return of Islamic fundamentalism. After the Revolution, Iran’s supreme leader Ayatollah Khomeini believed in creating an Islamic state that transcended borders. The events of 1979 then changed the Iranian regime but also set in motion greater changes throughout the Middle East. For example, as Dr. El-Eid explained, Islamist fundamentalists throughout the region viewed the revolution in Iran as an example of what could be done in their own nations.

The talk continued with a summary of the protests taking place in Turkey. The protests began after the Turkish government made plans to bulldoze Gezi Park, however as Dr. El-Eid informed us, this government project was simply “the straw that broke the camels back.” The protestors in Taksim Square, many of who are environmentalists, supporters of the military, women, and members of the LGBT community, represent distinct groups that each has their own set of grievances against the government. The protests that broke out embodied a culmination of resentment. Dr. El-Eid talked about how, among other concerns, many Turkish people are worried that the government is moving away from its secular roots. In addition, the way the government has responded to the protests, through using excessive force, has not only further angered the protestors but also much of the international community.

Dr. El-Eid also addressed the recent election of Iranian President Hassan Rouhani and whether the election of this moderate will change Iran’s future foreign policy. According to the speaker, the United States and other countries should not get their hopes up! Dr. El-Eid also pointed out that Rouhani recently stated that Iran would support Syria’s Assad regime until the end and it seems that Iran remains determined to continue acquiring nuclear technology. For these reasons, he believes that Iran will not undergo much change over the course of Rouhani’s presidency. Dr. El-Eid also mentioned that the economic sanctions are negatively impacting the welfare of ordinary people in Iran.

The crisis in Syria began as an uprising during the Arab Spring but has deteriorated to a bloody civil war. Dr. El-Eid mentioned that the majority of the Syrian people are Sunni Muslims who want a democratic government and the United States must engage with these groups and work to establish a more representative regime. Dr. El-Eid also expressed a view held by many in the international community that we need to be very cautious about deciding to drop arms in the region, a dangerous procedure with potential catastrophic results.

The audience asked many pointed questions ranging from the status of Turkey’s bid to join the European Union to the history of Sunni and Shiite groups. While answering these questions, Dr. El-Eid made a number of closing remarks that surely served as important takeaways for those in attendance. He acknowledged that crises and violence in the Middle East will continue and it will take some time for conflicts to subside. With that being said, he also emphasized the importance of strong political institutions and the idea that the best way to bring about change is through democratic elections rather than through violent means. 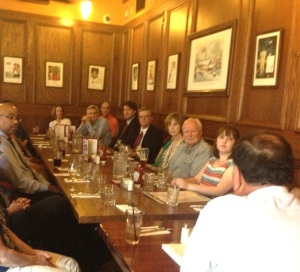 After the audience thanked Dr. El-Eid for his time and thought-provoking insights, the speaker complemented the Happy Hour group for being interested in global affairs. After acknowledging the complexity of the issues discussed, he stated that our world, now more than ever, is extremely interconnected, making it important to be aware and knowledgeable of what is going on around the globe. Clearly we share the same sentiment. Thank you to Dr. El-Eid and everyone who attended this Hot Issue Happy Hour. We will keep you updated on future events and look forward to seeing you soon!

Three things to know about the protests in Turkey: http://www.cfr.org/turkey/turkeys-protests-three-things-know/p30881

Three things to know about the crisis in Syria: http://www.cfr.org/syria/intervention-syria-three-things-know/p30681