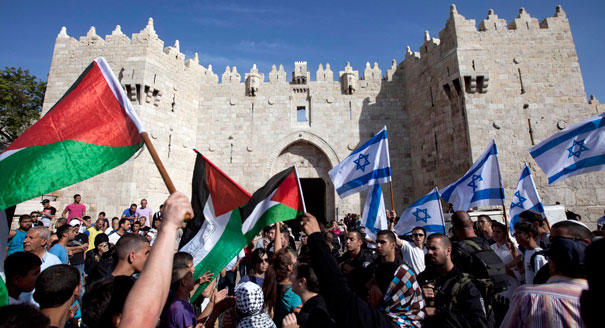 As part of WACCT’s Global Conversation Series, the Council held two programs addressing the Israeli-Palestinian Conflict here in Hartford. Carmel Ford, a member and WAC volunteer wrote the following re-cap of the two programs.  We’d like to thank our speakers, moderators, and volunteers for all their help with the programs!  We welcome you to add you voice to the conversation and leave comments, but please be respectful!

On October 23rd, the World Affairs Council of Connecticut (WACCT) hosted the first part of its two part discussion series titled – Is it Now or Never? –  Resolving the Israeli Palestinian Conflict. The first part focused on the Palestinian perspective of the conflict; and the second part, that took place on November 5th, focused on the Israel perspective on the conflict. I am extremely grateful that WACCT organized this event and provided presentations from both sides so that the audience had the opportunity to form their own conclusions.

Further, I felt that the events were quite timely because peace talks have seemed to stall in the last couple of years; however, in the last couple of months there has seemingly been a chance to reinvigorate the negotiation process.  The initiation for this change is perceived to originate in the instatement of John Kerry, the new U.S. Secretary of State. Kerry appears to be very dedicated to the prospect of peace.

The first part of the discussion series featured the Palestinian Permanent Observer to the United Nations, Ambassador Riyad H. Mansour. Ambassador Mansour was introduced by Chris George, who is the Executive Director of Integrated Refugee & Immigrant Services (IRIS) based in New Haven. One of the most memorable pieces of information that George imparted to the crowd during his introduction was “It is easy to take a side, it takes courage to be objective.”

The Ambassador briefly provided a history of the conflict, and touched on the factors that have been perceived to perpetuate the conflict, and hence impede the negotiations process. He specifically provided the example of Israeli settlements in the West Bank, which continues to be a contentious issue for both sides. The Ambassador also emphasized that, despite the obstacles, the Palestinians are ready and willing to live in peace with their Israeli neighbors. After speaking for a short time, the Ambassador took questions from the audience. The questions touched on the issue of settlements in the West Bank, the United States’ role in the peace process, and security issues.

The second part of the discussions series, on November 5th, featured Gil Lainer, Consul for Public Diplomacy at the Consulate General of Israel in New York. Consul Lainer discussed an array of topics related to the Middle East such as the Arab Spring, Iran’s nuclear ambitions, peace treaties that Israel has with other Middle East nations, and the Palestinian/Israeli conflict. In regard to the conflict, he emphasized the need to solve the issue of the 4.7 million Palestinian refugees and the need for Israel to ensure its security under the two state solution. The Consul also took questions from the audience. One audience member asked why, despite the fact the Israeli has a peace treaty with Egypt; the relationship between the two nations hasn’t developed beyond the signed agreement? The Consul recognized this to be true and expressed that hopefully the future would bring normalization to the relationship.