The entryway was packed at the University of Hartford’s Entrepreneurial Center, as guests put down their wine and cheese to pile into the room where Paula Bronstein was going to speak. People spilled from the doors and out into the hallway while music and images depicting life in Afghanistan lit up the room. The title of Paula Bronstein’s new book is Afghanistan; Between Hope and Fear, and you can tell as she speaks about the act of taking these pictures just how much meaning is contained in that title.

The specter of stereotype looms heavy in Paula’s remarks, as she tries to make perfectly clear that whatever we may have heard about the day to day experience in Afghanistan, we are wrong. We are not getting the full story. And that story is probably unobtainable, not in full, for someone who isn’t living it. Yet as the images flash above her one cannot help but feel a connection, reaching out from across time and space, imploring us to listen even if we can’t quite understand.

She describes the effort it takes to get close to her subjects, having to bridge cultural gaps and deal with her identity as a western woman. She has had women invite her into their home, only to be barred from reentry by a husband, upset he was not consulted in her admission. There are places in the country where she cannot go because it has become too dangerous. The audience sits patiently, a few shifting in their seats, taking in the experience of this world renowned photojournalist. 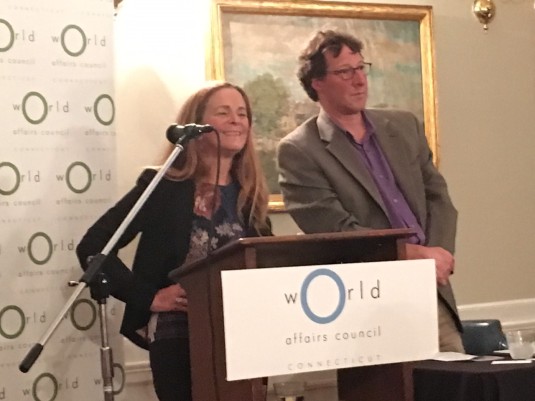 Dan Haar, columnist at the Hartford Courant and a friend of Paula’s, rises to begin the Question and Answer portion. An eager audience member seizes on what was planned as a back and forth between Paula and Dan but they are professionals and can hardly fault her for enthusiasm. The tone becomes more conversational now, like a very intense living room discussion. The topics are varied, from the role of women in Afghan society to the impact of war on day to day existence. Paula talks about the U.S. and how intertwined we are with this country, relaying the disbelief of people she speaks with, who can’t believe we are still in Afghanistan, that American troops are still dying. She talks about the day to day, having to wear a burka and the relationships she needs to cultivate in order to capture these photos.

People file out, return to the wine and cheese, gather for buying books, and get them signed. Conversation fills the space, and laughter can be heard. In the atrium, surrounded by the dark wood and an elegant banister, it feels like New England. But part of me is still lost in the eyes of a young Afghani woman, whose hands were bandaged after she tried to take her life with cooking oil, seeing no other escape from her marriage. The fear is real, and it radiates from her eyes. But the hope is real too. And you can see that limbo, feeling that pull from the void and the light, the temptation to give up and the audacity to hope in every picture Paula Bronstein takes. They are tiny slices of existence, the briefest flickers of humanity, enshrined forever by photons. And we watch them, and wonder at the truth they hold.