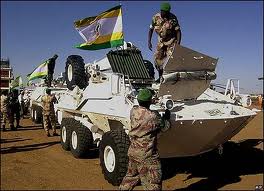 The African Union (AU), formally the Organization of African Unity (OAU), has undergone tremendous restructuring over the past decade. The continental body is the most viable entity that can work to bring a considerable reduction and hopefully, total defeat to the recent trend of terrorism and other civil conflicts on the continent. For many years, Africa’s foremost continental body was functional only in name, but abjectly powerless at a period when the continent faced some of it most virulent conflicts in the 1980’s and 1990’s.

Today, with a new name and a new vision, the African Union almost by design boasts of a new generation of leaders with an insatiable desire to ensure the total transformation of the continent. These new breed of leaders are some of the most democratically minded and progressively conscious the continent has seen since the post-colonial era.Regrettably their passion to change the destiny of their motherland has hit a new challenge. The recent attacks in Kenya has underscored the fear that there are some real and disturbing trends to terrorist tactics focusing on the African continent; more importantly, African cities are now as much targets as New York City, London, Madrid, Bali or Islamabad.

After the twin bombings in Kenya and Tanzania in 2008, many in Africa and the West could not fathom why Africa was targeted; it eventually became obvious to many when only United States landmarks were attacked. However we cannot forget that majority of the victims in those attacks were indigenous Africans. That attack was very much an attack on Africans, as much as it was the United States of America.

Fifteen years later, it is indisputable that the African continent has become a breeding landscape for terrorist activity. Violent terrorist groups like the Al Qaida in the Islamic Maghreb (AQIM), operating across the Sahel region of North Africa, Boko Haram in Nigeria, and the Al Shabab in Somalia. These groups have demonstrated their ferocity and capability to cause violent acts that eclipse those seen in Pakistan and Afghanistan. Countries like Uganda, Algeria, Somalia, Nigeria, Mali and Kenya have continuously been victims of these attacks, and like a cancer, it will continue to spread if not bravely dealt with.

The African Union has demonstrated a clear understanding that in order for the continent to develop economically and politically, the peace and security of each member state has to be protected. Guided by this basic principle, and thanks to their Joint Peacekeeping Force, the AU worked very hard to stop the war in Liberia; they were diplomatically instrumental in averting the total conflagration of Cote d’ Ivoire, after Laurent Gbagbo refused to hand over power. Recently, they joined the French Forces in Mali in defeating Al-Qaida in the Islamic Maghreb. They have maintained a continuous presence in the Sudan under a United Nations mandate following the Darfur conflict.

African forces have an enviable record as Peacekeepers in various parts of the world. In fact they have been indispensable to the United Nations in Lebanon since the end of the conflict. Through all these the AU member nations have not relented in their efforts and continue to increase its capabilities in dealing with flash points across the continent. Since 2007, they have maintained a continuous presence in Somalia through the African Union Mission in Somalia (AMISOM). This mission has been able to curtail the advancement of Al Shabab and driven them away from key strategic sectors of the country. However, any keen observer understands that the fight against terrorists in Africa is just unfolding.

It is time the efforts of these unsung heroes are duly recognized and their capabilities augmented to face this new threat. Their sacrifices have been incremental, yet consistent. As I make the case for the African Union and its Peacekeeping Forces to be recognized by the international community for their sacrifice, I believe a Nobel Peace Prize is very much in order.

I am encouraged by the Nobel Foundation’s wisdom in awarding the 2013 Peace Prize to the Organisation for the Prohibition of Chemical Weapons, (OPCW); that although the effort to purge the world of chemical weapons continues, those who are charged with that duty should be commended and encouraged to undertake their insurmountable task.
In the same vein, the African Union and their Peacekeeping Forces should be recognized so they can continue in their unflinching quest to bring lasting peace and security to the continent of Africa.